Quality dispute: How proper negotiations allow to keep the contract and commercial relations 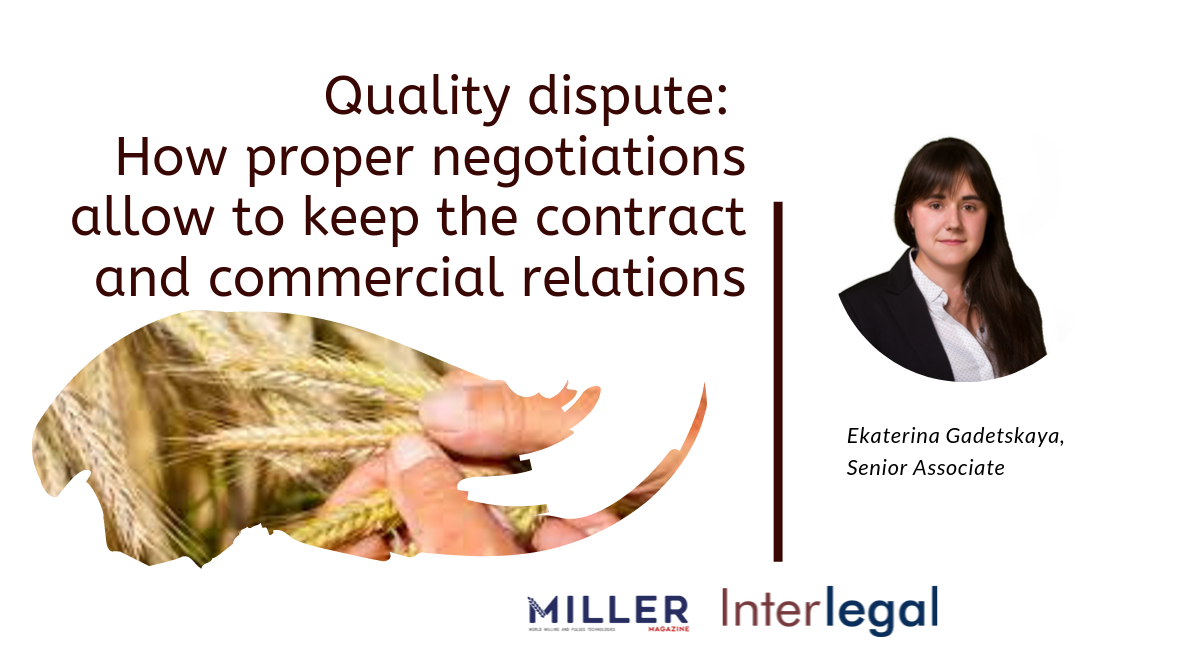 Interlegal represented the buyer under CIF contract for sale of seeds, governed by FOSFA Contract No. 11 – according to the quality certificate provided by the seller, the Goods appeared to be contaminated by alive insects, despite the fact that contractual quality specification directly provided for absence of alive insects. That was unpleasant commencement of a complex and multifaceted case shared with us in detail by Ekaterina Gadetskaya, Senior Lawyer of Interlegal.

The buyer notified immediately the seller on the breach of Contract by the latter, while the seller denied it and insisted that fumigation would eliminate contamination before the Goods arrive to the discharge port.

Most of all the buyer was concerned about large concentration of alive insects in the Goods, lack of the fumigant for disinfection, as well as strict phytosanitary rules of the importing country which might result in prohibition of import of the allegedly defective Goods.

The situation was complicated by the fact that the seller failed to issue invoice due to the delay in obtaining quality analysis results, which were supposed to determine application of allowances. Meanwhile the Vessel with the Goods on board reached the port of discharge and the issues with alive insects, payment for the Goods and provision of original documents were getting more and more acute. The seller stated that all the expenses related with demurrage of the Vessel which would result in late issuance of the invoice and delay in payment shall be on the buyer’s account.

Interlegal team faced the following questions:
1. May the buyer terminate the contract due to the seller’s breach of quality terms and refuse to accept goods at the port of discharge?
2. Whether the buyer should commence negotiations with the seller regarding non-conformity of the quality of the Goods and claim discount?
3. Whether the buyer is liable for demurrage of the Vessel due to late presentation of documents?

Search of solution:
The right to terminate the contract under English law depends directly on the nature of terms, which were breached, namely: whether such a term is deemed as condition, warranty or innominate term.

The innocent party is entitled to terminate the contract only when the breach of condition took place; otherwise the remedies available are limited to the recovery of damages caused by the breach.

For instance, Sale of Goods Act prescribes that terms regarding compliance of goods with agreed quality shall be deemed as condition. In our case, the contract contained the following clause: “Absence of alive insects in the goods is warranted”. Obviously, the Parties intended to determine this term as warranty (not condition).

Also, pursuant to Clause 2 of FOSFA Contract No. 11, “if the seeds upon arrival are damaged by seawater or otherwise, or are in unsound condition, such contract shall not be deemed as invalid, but the cost shall decrease in the amount prescribed by agreement or arbitration award”.

In such circumstances the buyer is not entitled to terminate the contract and reject the Goods at the port of discharge. Where a warranty for the absence of alive insects is breached the buyer is entitled to claim damages arisen out of this breach.

The key issue in the given situation was the issue of possibility to import goods with alive insects, since phytosanitary rules of the import country were rather strict. At the same time, depending on the species of insect, if additional fumigation is made, import is still possible. There was also a chance that the fumigant already used was enough to eliminate alive insects during the voyage. Having analysed the fumigation certificate, Interlegal lawyers concluded that there was enough and sufficient dosage of fumigant for killing alive insects. Therefore, no alive insects should have been present in the Goods by the time of the Vessel’s arrival to the port of discharge.

Interlegal lawyers served on the seller substantiated letter of claim together with notification on liability for all damages incurred by the buyer due to presence of alive insects in the Goods, as well as requested from the seller so called Letter of Undertaking in respect of losses caused to the buyers due to breach of contract on the part of the seller.

Liability for demurrage was influenced by provision of a set of shipping documents by the seller on the one hand, and by payment for the goods by the buyer on the other hand. Under CIF contracts these two stages are essential and strictly consequential (submission of documents prior to payment). In other words, until the documents are provided, the buyer is not obliged to proceed with the payment. Usually the term for provision of documents is limited, e.g. not later than two days before the vessel’s arrival to the discharge port. Accordingly, the contracts often set the seller’s liability for late provision of documents: e.g. Seller shall be liable for any expenses, costs, and losses due to such late submission.

The buyer seemed to be protected against the seller’s claims for the demurrage, since it was the latter who failed to provide documents in due time. Although it is first and common impression, yet pitfalls bearing additional risks for the buyer needed closer attention. For instance, the contract contained the following payment clause:

“100% cost shall be paid against scans of the documents specified therein, not later than two days prior to the vessel’s arrival to the discharge port, but anyway before opening holds”.

This wording expresses that in any case the buyer should pay for the Goods before the discharge process commences; otherwise there is a risk of default and liability for damages, including demurrage. It is quite an ambiguous situation, since the contract provisions do not conform to each other in full. It should be noted that the clause of unconditional payment before opening holds to some extent contradicts the CIF sale concept which is regarded as sale of documents under English law.

RESULT
Having analysed all the circumstances of the case, legal provisions and possible risks, Interlegal lawyers provided the buyer with recommendations concerning further interaction with the counteragent, as well as advised about ways of the protection of his legitimate rights under current conditions. Despite obvious violations of the contractual terms by the seller , the buyer came to the conclusion that the most beneficial option for the completion of the business should be negotiations: since the sooner payment issue is settled, the sooner the holds would be opened in order to check the actual condition of the Goods (i.e. whether there are still grounds for dispute between the Parties). Moreover, in order to save the buyer’s right for further damages recovery, the buyer was instructed regarding the way how to conduct negotiations with the seller and which particular measures are reasonable to be taken.

Negotiations resulted in timely payment for the Goods and presentation of documents to the buyer. Upon arrival of the Goods to the port of discharge, there were no phytosanitary deviations, no problems regarding customs formalities, as well as no claims (including those concerning demurrage) raised by the seller.

Due to professional teamwork of Interlegal Senior Lawyer Ekaterina Gadetskaya and Lawyer Valeria Ivanova, the online legal support was provided to the client in such a fast-moving situation, so that the client was able to complete the deal, avoid losses and save commercial relations with the counteragent.