Ever Given grounding: who is liable for carrier and forwarder delays? 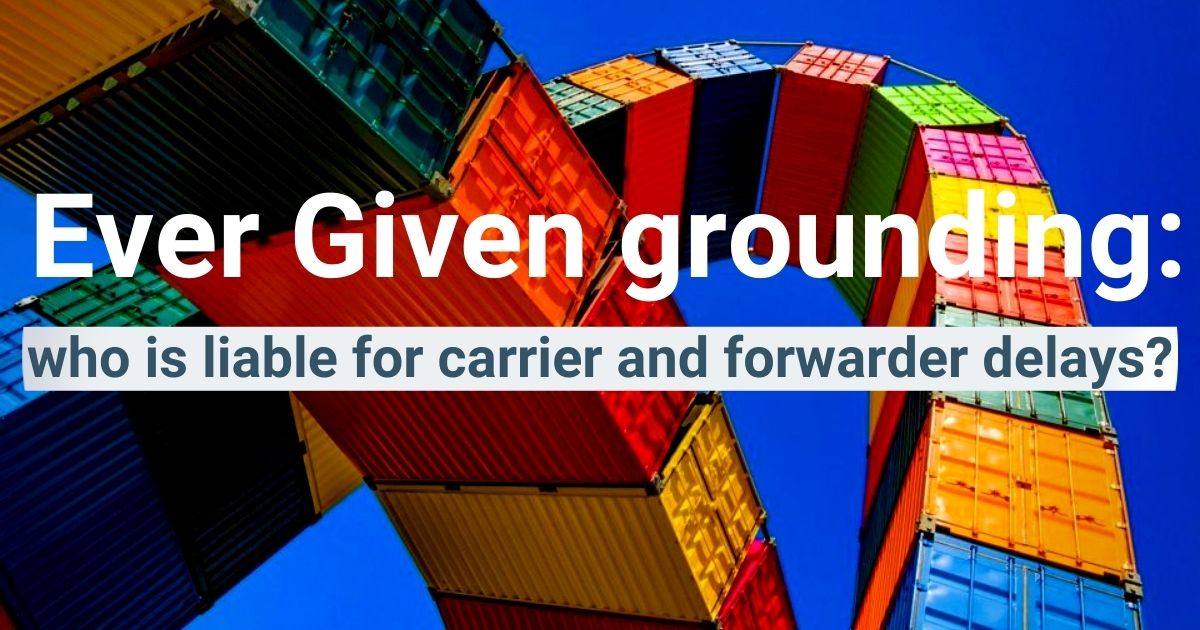 The grounding of the Ever Given container vessel in the Suez Canal caused considerable congestion for many other vessels which were trapped on both sides of the canal. As such, cargo interests – such as shippers' and consignees' respective cargo insurers, as well as the sea carriers of the respective vessels and the initial (multimodal) carriers and forwarders – are faced with damages arising from these delays.

Carriers, forwarders which have agreed a fixed freight and sea carriers are liable under general civil law as German shipping law does not provide for liability rules for delay.

When determining liability, a key consideration is whether the carriage has actually been delayed (ie, whether the shipment has arrived or will arrive after an agreed delivery date). Usually, no fixed delivery dates are agreed in international sea carriages; rather, the carriers state an estimated time of arrival (ETA). However, German judgments consider a vessel's arrival to be delayed if the ETA is delayed by half of the usual voyage time. For example, if an ETA of 1 April 2021 is quoted and the usual time for the sea voyage from the port of departure to the port of destination is 30 days, the arrival at the port of destination will be considered delayed from 15 April 2021 onwards.

What should cargo interests do?

If the vessel has still not arrived after the period set in the overdue notice, cargo interests are generally entitled to claim compensation for the damages caused by the delay. This can result in high claims comprising pecuniary damages (eg, machine downtime) and penalties as general civil law does not provide for limitations of liability for delay.

How can carriers limit their liability?

There are two main ways in which carriers or forwarders can escape or limit their liabillity.

First, carriers can prove that the delay is the result of a circumstance for which they are not responsible according to Section 286(4) of the Civil Code. Carriers have the onus of proving exclusion of liability – namely, that acts and omissions of their vicarious agents or subcontractors are not attributable to the carrier. The circumstances resulting in the grounding of the Ever Given could be considered a third-party fault for which the carriers (of the delayed vessels, not the Ever Given itself) are not to blame or even a force majeure incident. However, the longer the delay, the weaker the carrier's argument. On the one hand, as the Ever Given blocked the Suez Canal for only six days, it should at least be obvious that a change of route via the Cape of Good Hope was not a proper option. On the other hand, carriers will also have to explain any delays which occur in the further course of the shipment, with possible further congestions at the port of destination. Ultimately, it will depend on:

In other words, there is a risk of liability for cargo interests and their respective carriers and forwarders under German law and it is essential that the parties involved get proper legal advice.

Second, carriers could rely on limitations of liability which they have agreed with the cargo interests either in written contracts of carriage or in general terms and conditions. In particular, the German Freight Forwarders' Standard Terms and Conditions 2017 (ADSp 2017) could give rise to a limitation of liability for a carrier or forwarder. However, this is also not a given as unclear clauses in general terms and conditions could be considered null and void and the wording of the specific clauses in the ADSp 2017 might be problematic.